I’ve been wanting to write a post about Pontypool for some time now, and I’ve put it off because a) I’ll never do the damn thing justice with my ramblings and b) procrastination FTW! But it’s time I at least brought it to the attention of everyone I know who loves zombies because, seriously, you have not seen zombies like this before.

Writers and filmmakers have tried to freshen up zombies in a variety of ways, and I don’t mean by hanging those little cardboard pine trees from their ears, although that would be hilarious and needs to be filmed immediately. They’ve made it a about speed, science, or just coming up with different reasons people might have for craving the brains of other people, which are probably delicious with the right sauce. But as far as I’m aware, no one has ever made zombies about LANGUAGE.

In this version of (non)zombie lore, certain words are infected and using them leads to stuttering, confusion of meaning, confusion of sounds, just… confusion in general. And then you try to eat through other people’s mouths in order to steal their words. Ya got that? It’s not about getting their brains. You eat their faces in order to steal their language, in the most physical way possible.

The entirety of the film takes place in a church basement/radio station with a relatively tiny cast. Anything outside the basement is experienced through aural avenues. On the surface, it doesn’t sound like an interesting watch, but believe me, it is. If you had told me, after I watched this film for the first time, that the cameras rarely left the basement, I wouldn’t have believed you. It just doesn’t feel that limited. At all. The actors do an amazing job of convincing you that the world outside is real, that the community suffering from this new kind of disease is far from fictional. 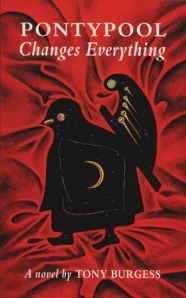 After I saw the film, I tried to learn more about it and discovered it was originally a novel called Pontypool Changes Everything by Tony Burgess. I started reading the first few pages and had to quit. It gave me flashbacks of Ben Marcus’ The Age of Wire and String, which I recall thinking was kind of brilliant, at first, until the innovation overwhelmed me. I just couldn’t stick with it because everything in it meant so little to me, and I fear Pontypool Changes Everything would have the same effect.

This may be one of those rare times when the movie does more for me than the book. I think the actors really sold this one—really, really sold it. So if you’re looking for a truly different take on the whole zombie fad that seems to be happening right now, give Pontypool a look. It’ll make you think, but not at the cost of the story. It challenges the boundaries of its genre without ignoring them completely. It is absolutely worth a watch, if only to discus what the hell was going on with that out-of-nowhere ending.

Find my books on Goodreads.